All sectors – from young people to business and finance – actually want the same thing: a government that creates a plan for the future of the Netherlands, in which the Sustainable Development Goals (SDGs) are central. It is the most important conclusion at the annual “Route 2030” meeting.

Today, 19 May, is Accountability Day. Traditionally, the moment scrutinize the previous year’s public policy. When it comes to sustainability, two reports are put on the table: the Monitor Brede Welvaart en SDG’s of the CBS and the Fifth National SDG report ‘Nederland Ontwikkelt Duurzaam‘.

This shows that in the Netherlands, with 9 years to go until the deadline in the year 2030, there is a lot of work to be done. Not that it’s all doom and gloom. Our health has improved over the past year – despite the corona. Our disposable income has increased. We recycle a little more and even use resources a touch more efficiently.

But that doesn’t disguise the fact that there are a lot of shortcomings under the skin. “The Netherlands is really in the European rearguard when it comes to climate action,” said Jan-Pieter Smits, project manager of the Broad Prosperity Monitor and SDGs at CBS. “Our emissions remain very high. We continue to put great pressure on natural capital elsewhere in the world.” Those major issues, along with issues such as declining literacy and slow progress on gender equality, are key areas of focus for the Netherlands. 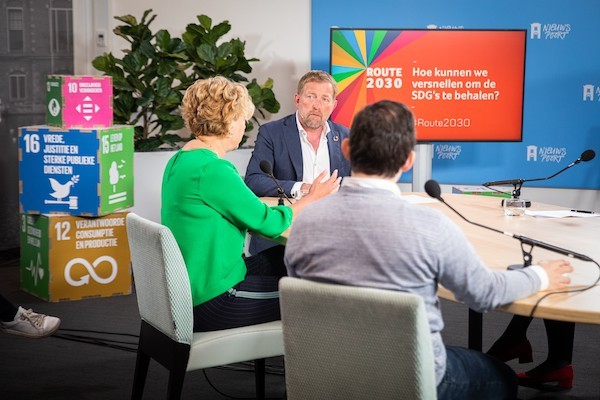 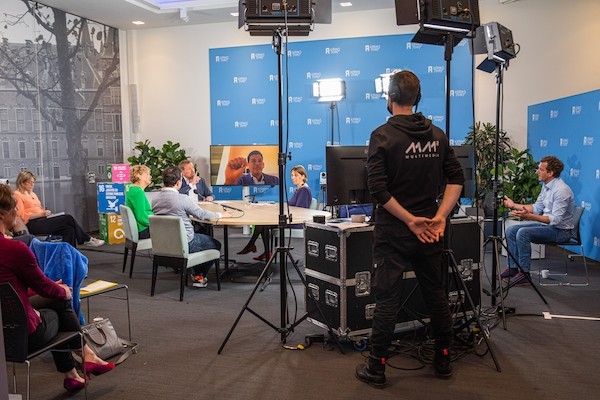 A 6 for our responsibility for “there and later”

Moderator Harm Edens asked Smits what score he would give the Netherlands based on the above reports. “A good 8 when it comes to SDGs in the Netherlands itself,” replied the one. “But only a 6 when it comes to our responsibility to future generations and other countries.” The major impact of our lifestyles on places elsewhere in the world, especially developing countries remains a major problem.

So much for the problem statement. What today was about were solutions. To that end, a 20-member panel, physical and digital, had gathered at Nieuwspoort in The Hague, along with over 850 online participants, representing various sectors.

Kim Putters, director of the Social and Cultural Planning Office (SCP), immediately drew an important conclusion: “Although the fact that the numbers look more or less good, we feel that things are changing in our society,” he said, referring to the sustainability transition and the effects of the corona crisis. “Then you have to put a dot on the horizon to indicate the new direction.”

‘Such broad public support is a luxury for politicians’

The meeting revealed how much unanimity there is on that dot on the horizon. Because it wasn’t just Putters who talked about the importance of the SDGs and broad prosperity. Floris Mreijen, deputy director of the Netherlands Bankers’ Association (NVB), also made it crystal clear: “We see a very broad coalition of parties who all want the same thing. They are calling out to politicians: build a sustainable coalition agreement. Make the SDGs central to it. It’s a luxury for politicians if you have such broad social support.”

Earlier, Linda van Beek, director of Global Compact Network Netherlands, explained how companies are already fully committed to those sustainability goals. “You would think that they would have other things on their minds. But a majority put more effort into the SDGs last year.” Maria van der Heijden, director of MVO Nederland, also talked about the enormous will to innovate among the large group of companies affiliated with her umbrella.

And it doesn’t stop with business. Young people also see how the SDGs can help move in a new, sustainable direction after the crisis. Maurice Knijnenburg, president of NJR and SER youth platform, wants a voice in that process: “Such a coalition agreement should not be something between politicians,” he says. “Young people should also have a voice in it.”

In short, there was a unified block with a clear message to the new cabinet. Rina Molenaar, director at the NGO Word and Deed summed it up succinctly. “We will not accept a coalition agreement without the SDGs being the compass,” she said. 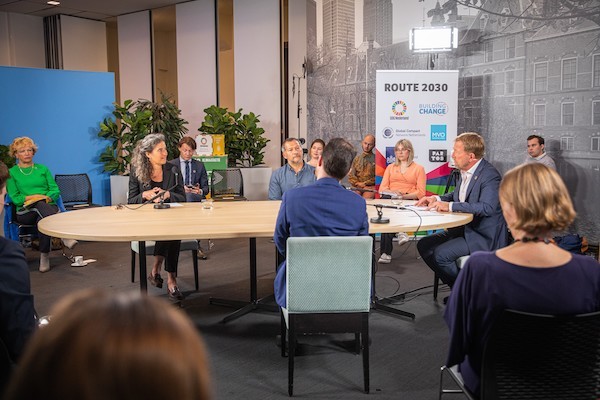 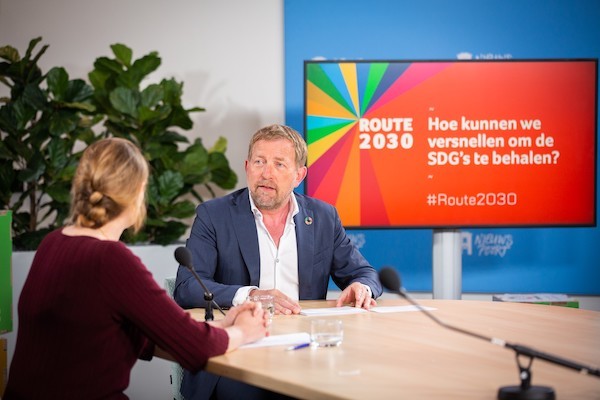 Not settling for “we’ll fix it later”

Three members of the House of Representatives listened in and were able to respond. Joris Thijssen of PvdA joined the speakers. “We need to make the goals very concrete” he said. He referred to the climate agreement, for example. “If the targets are not met (as with the climate agreement, nvdr.), we cannot accept that. We can no longer settle for the answer: we’ll fix it later.”

But Ruben Brekelmans (VVD), whose party had a hard time picking up the SDGs in the past, also sees the goals as a clear guideline now. “The SDGs need to be taken up government-wide,” he said. “Not just by Foreign Affairs.”

With that, he was on the same page as Raoul Boucke (D66), who said that in his opinion the SDGs in the new cabinet will be invested in the Ministry of General Affairs, under the prime minister. Boucke also expressed the importance of the government holding itself to agreements made.” If we don’t do it ourselves, we can’t ask others to do it either.”

“I don’t think so,” replied the one. “I hope that on Accountability Day next year the Prime Minister will be sitting here. That she tells how we have found a way out of the difficult situation we are now in – with a corona crisis, with a biodiversity crisis. And that the SDGs have given us the necessary perspective to work towards.”