The Sustainable Development Goals (SDG’s) consist of 17 goals and 169 sub-goals which will make the world ‘a better place by 2030’. They are part of Agenda 2030, as launched by the United Nations in 2015. The goals should end poverty, inequality and climate change among more. They are the successors of the Millennium Development Goals. What is new is that the goals apply to all countries and that businesses are considered to play an important role in the realization of the goals.

By the end of 2015, world leaders from 193 different countries signed the agenda which provides a world agenda that should be realized before 2030.
UN Global Compact is the biggest worldwide sustainability-oriented initiative that received the mandate from the United Nations to stimulate businesses and support the realization of these goals while doing so. In The Netherlands, Global Compact Network Netherlands is committed to doing this together with NGO’s, the new generation, knowledge institutions and communities, among many more. By doing so, we are connected with the SDG-Charter initiative to foster partnerships.

The Dutch Cabinet recently publishes the first progress report about the SDGs, ‘The Netherlands works sustainably’, including an impression from Global Compact Network Netherlands, VNO-NCW, MKB-Netherlands and more. The Minister for Foreign Trade and Development Cooperation also presented the Dutch circumstances regarding the SDGs at the United Nations in New York in the National Review. 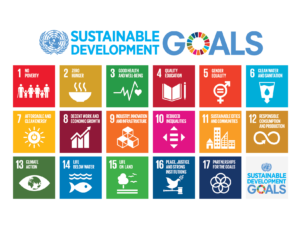